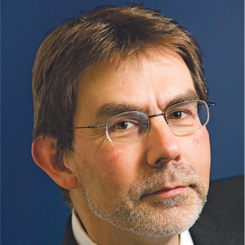 Raised in rural Shropshire, in a family that was “very middle of the road” politically, Tom Wilson was an unlikely teenage leftie. In fact, his parents – both teachers – regarded his political awakenings with some amusement, he says.

Educated at Wellington Grammar School, which “had pretentions to being a posh school but was in fact a very ordinary grammar school,” he was inspired by the example of former pupil Len Murray, who went on to become the general secretary of the TUC. “This was back in the early 70s and me and my mate Desmond, whose dad was convenor at GKN Sankey – a local engineering company – were sort of radical lefties,” he recalls. “We were fixated on the fact that if Len Murray came from our ordinary school and he was general secretary of the TUC, well then we could do the same.”

Having studied hard at school – something he jokes was down to growing up in a small village and having “nothing else to do” – Wilson went on to St. Andrew’s University, where he studied philosophy, got heavily involved in student politics and spent a lot of time arguing with “rising young Thatcherites.” It was an exciting time to be a student; St. Andrews was the first university to opt out of the National Union of Students – a move Wilson fought against – and the protest movement had begun to gain momentum.

But it was working during the university holidays that really started to shape his political interests, he says. During his time at St. Andrew’s he worked in construction, on factory production lines, as a hospital porter and, in perhaps his most unusual job, cooked breakfasts for workers on an oil-rig in Scapa Flow, off the Orkney Islands.

“I always think actually I learned more from those experiences than I ever did from university,” he says. “I learned what life was like for ordinary working people and how bloody awful and boring lots of peoples’ jobs were.

That was where I got into learning for the first time, because it really kind of impressed upon me, that in those days particularly, if you didn’t do well at school and you hadn’t got yourself into college or university you were stuck. You were stuck in some dead end boring job for the rest of your life.”

His experiences pressed upon him the significance of his upbringing, of being brought up around books, with parents who encouraged him to study. While many of his colleagues were equally, if not more intelligent and well-informed as him, the hand they had been dealt in life meant that while he would be going back to university – and a choice of jobs or careers, many of his colleagues “were stuck there forever.”I’m not saying unions are perfect, but I’ve always felt more comfortable in a union than any political world.”

But he admits his empathy was misdirected at times. He recalls one job, working for the Pepsi Cola bottling factory in Acton, west London, where “basically, the job was to wade up to your knees in broken glass and sticky kind of Pepsi that was all over the floor” taking bottles off the production line and putting them in plastic crates.

Having seen a notice pinned to the wall that made him realise that the recruitment agency he and his colleagues – many of whom were African immigrants – were employed by, were giving the workers half what they were being paid by the company, he was incensed.

I’m not saying unions are perfect, but I’ve always felt more comfortable in a union than any political world.”

But he soon found colleagues didn’t necessarily share his views. “I said to the bloke next to me ‘Look at this, we’re getting paid half – why is the agency getting all this money?’ And he was horrified that I was kind of rocking the boat a little bit and because he thought it was a really good job and he thought I was mad to get upset about it or protest about it…he could see it was completely unfair that the agency was ripping us off to that extent, but he thought it was inconceivable that anyone could do anything about it.”

After university, Wilson did a diploma in Social Administration at York University, followed by a Masters in Industrial Relations at Warwick. After a brief spell working as a journalist, on a magazine for trade union officials, he moved to the GMB, where he spent six years doing research, speech writing, drafting wage claims and teaching shop stewards. He then moved to the Labour Party, where he spent three happy years as their national trade union liaison officer and got to know some of those, like Peter Mandelson, who went on to be part of the government.

“I know he isn’t terribly fashionable in some quarters, but he was a very personable, bright bloke,” he says of Mandelson. “I didn’t always agree with his politics but then so what – you never agree with everyone’s politics. He was a very interesting guy and unlike some others, he was genuinely interested in the relationship between the trade unions and the Labour Party.”

There were many ups and down in the job, but the biggest low was the 1987 election, says Wilson. Having “ate, slept and breathed” the campaign for weeks, losing the election – Labour’s fourth successive defeat – was a crushing blow.

After three years working for the party, by which time he had two small children, he realised the job wasn’t compatible with normal family life. He moved to the Association of University Teachers (now known as UCU, since its merger with the National Association of Teachers of Further and Higher Education Nafthe in 2006), where he stayed for the next 15 years in a variety of roles, including head of research.

Wilson joined the TUC in 1993 as head of organisation and services and was appointed director of their learning and skills organisation, unionlearn in 2009. He is immensely proud of the introduction union of learning reps, a new kind of union activist role that is concerned with helping employees access learning and training – which he says are “massively important and the foundation of everything we do.” The biggest challenge for unionlearn at the moment, is moving employers on from awareness to action, from wanting unions “just to be kind of cheerleaders for what they do, to a genuine kind of equal and open discussion where they sit down and are prepared to actually negotiate properly and openly about the way they organise their training.”

More broadly, the challenge for the union movement is being clear that while it does not support many of the government’s policies (particularly its stance on pensions), it does acknowledge the support the government is providing for skills and training.

Wilson speaks warmly of the skills minister John Hayes, who he says is “ engaged, supportive and interested” and “plainly cares about unionlearn.”

But he is not so effusive about the Confederation of British Industry (CBI), who he says “are supposed to represent British employers and they don’t really do enough in my opinion to argue the case for better and fairer investment in training… “

In his vision for a fairer education system for all, there would be a National Learning Service, instead of the “fragmentary patchwork” of further and higher education currently in existence. In this kind of system, he says, people could move more easily from further to higher education – and between institutions – which, above all, would make funding far less complicated.

While at 59, he has no plans to retire, he would love to write a book about history of trade union learning which, he concedes, might make “most people roll their eyes in horror and think ‘how boring can you possible get?’” Clearly, after more than 30 years’ involvement with unions – that is where he feels most at home.

“When I was at the Labour party, I was struck by the way party people are much more prone I think to looking at things in terms of individuals – you know, who’s in and who’s out. But unions are a different sort of world where culturally you look much more at people generally in terms of the organisations or the groups of people they belong to… I’m not saying unions are perfect, but I’ve always felt more comfortable in a union than any political world.”