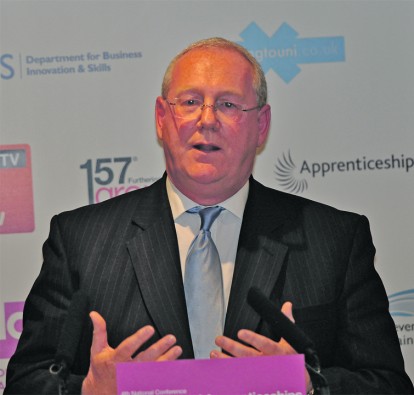 Simon Waugh is to step down as chief executive of the National Apprenticeship Service (NAS).

The revelation follows a turbulent six months for the NAS, including a dramatic rise in the number of new apprentices aged over 25, as well as the launch of a review into the quality and duration of all apprenticeship schemes.

It also comes on the same day that Geoff Russell, chief executive of the Skills Funding Agency (SFA), declares his second retirement.

Mr Waugh says he will leave his post at the end of March in order to spend “more time with his family” following the conclusion of his initial three-year contract at NAS.

He said: “I have achieved all that I set out to do when I joined the NAS, and after the considerable success of the past three years I believe that this is a good time to move on.

“It was a very difficult 2011 for my family and I look forward to working part time and spending more time with them.”

Mr Waugh was appointed as chief executive of the then newly formed NAS in February 2009.

Gordon Marsden, Labour’s Shadow FE, Skills and Regional Growth Minister said: ‘The simultaneous and unexpected announcement that the two key people directing the Government’s skills funding and apprenticeships policy are resigning is bound to raise serious questions and concerns in the sector as to the future delivery of BIS’s Apprenticeships, FE and Skills programmes with increased demands on the NAS from Government and stretched staffing with overall Government cuts.

“Ministers will need to respond to such concerns fully and urgently.”

Mr Waugh said he is “immensely proud” of the NAS’ achievements.

“Since NAS was established in 2009, we have seen a significant increase in the number of employers and young people participating in the Apprenticeship programme,” Mr Waugh said.

“Quality is at an all time high and still improving, and the programme provides opportunities in more sectors and job roles than ever before and we are investing in Apprenticeships at Levels 4, 5 and 6.”

The NAS has been repeatedly scrutinised about the misuse of public funding and the rising number of short apprenticeship schemes, as reported in FE Week.

A review into the quality and duration of apprenticeships, led by the NAS and the Skills Funding Agency (SFA), has led to a minimum duration of 12 months for all apprentices aged 16 to 18, announced by Skills Minister John Hayes in the House of Commons last month.

An inquiry by the Business, Innovation & Skills (BIS) Select Committee is also now underway, while an update on the government’s employer-led review into apprenticeships is due to be announced soon.

“NAS has clearly demonstrated itself as an organisation that responds creatively, flexibly and dynamically to the demands of employers, individuals and communities,” Mr Waugh said.

“The support from Government and personally from Minister Hayes over the past three years has been tremendous.”

Mr Waugh is a non-executive Chairman of CMC Markets Plc, Chairman of SPARKS children’s charity and is also a life fellow of both the Marketing Society and the Institute of Direct Marketing.

John Hayes, Minister of State for Further Education and Lifelong Learning, said: “I would like to pay special tribute to the outstanding work that Simon Waugh has presided over as Chief Executive for the National Apprenticeship Service.

“Apprenticeships are at the heart of our drive to equip people of all ages with the skills employers need to prosper and compete, which is why we are investing record amounts in increasing numbers and quality.”

Simon started his career working as a temporary member of staff at American Express, later becoming sales and marketing director of the UK branch.