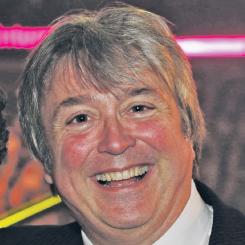 Simon Bartley’s school memories could have come straight out of an Enid Blyton novel. Educated from the age of eight at a Catholic boarding school in Lancashire, by the sounds of it, he enjoyed an idyllic childhood filled with tuck boxes and wholesome boyish pursuits.

“There used to be a school train just like in Harry Potter,” he recalls. “There was a 10 minutes past two service that left Euston on a Tuesday afternoon that was 10 compartments long, and as you worked away from the barriers towards the engine the year groups went from eight-year-olds to nine-year-olds to 10-year-olds…and we’d all chug up to Preston together.”

And while there was usually “a bit of blubbing” during the station farewells, most of the boys – him included – had far too much fun to miss their parents.

But while he gained a lot from his schooling (include a passion for community work which he still has today) it was at a further education (FE) college in Essex that Bartley says he first experienced top quality teaching.

After disappointing ‘A’ level results, he moved back with his parents in Chelmsford, and enrolled at the local college for resits, where he found most of his fellow students were from also public schools, a system he says” had failed them as it had failed me, academically.”

With the help of the outstanding teachers at the college, Bartley’s passion for learning was reignited, and the following year, he went to Durham University to study engineering science and management.

Bartley is endlessly enthusiastic about Durham, where he says he “learned more about life and had greater fun” than at any other time. After the “restricted atmosphere” of boarding school and the culture shock of living with his parents after more than a decade away from home, university was about “loosening the corsets” and having fun.

After university, Bartley went into engineering, working his way up through the ranks to the role of site engineer.

During his five years in the profession, he worked on some iconic buildings, including the British Library and Heathrow Airport, but while he enjoyed the work, he couldn’t quite shake the feeling that there was something else out there for him.

When his father invited him to join the family business – an electrical contracting firm founded by his great grandfather – he decided to give it a go. After another year at Durham working towards a Masters degree in Management, he joined C.J.Bartley’s, eventually taking over from his father as managing director in 1994 and then as chairman in 1997.

While he enjoyed running the family firm – which had an impressive portfolio of clients including London Bridge and the Globe Theatre – Bartley “wasn’t a particularly good businessman.”

Running a business could be “a lonely business” and he soon discovered that he was far more interested in people than “making a hard-nosed profit.” And it was this that sparked his interest in “the politics of vocational education” and led to him to sit on the boards of various industry bodies, including City & Guilds. But the responsibility could be worrying, he says.

“We had up to 100 people working for us, but when you are at the top, you always know that you are responsible for the livelihoods not only of those 100 people but also their wives and children and all the rest of it,” he says. “The day-to-day responsibilities of finding enough work and getting paid weighed heavily at times.”

And in an increasingly tough economic climate, where “blue-chip clients were no longer prepared to pay any premium for quality” the market was becoming increasingly tough. So when a company made an offer for the company in 1999, Bartley and his father decided to sell up.

After a short spell as sales, marketing and business development director under the company’s new owners, Bartley decided to go it alone as a consultant, specialising in anything from “lighting to heating and ventilating…to the development of apprentices and young people.”

Getting involved in the WorldSkills competition was a natural progression. In the 1980s and 1990s, his father had sat on the board of UK Skills (the not-for-profit organisation that managed the UK entry for WorldSkills at the time), travelling around the world for the biannual competition.

So when he was invited to join the team putting together the UK’s bid for WorldSkills 2011 in 2006, he jumped at the chance. And when he heard there was a chief executive role up for grabs at UK Skills, he was straight on the phone asking Chris Humphreys (then chair of UK Skills) if it would be an embarrassment if he applied.

Having being assured that would definitely not the case, Bartley put himself forward and landed the job.

In October 2010, he was elected president of WorldSkills International – the not for profit membership association which aims to promote vocational skills and education – and took up the four-year post in October last year.

One of the biggest challenges for the member countries, he says, is keeping the momentum going between competitions so it is not just a “competition every two years with nothing in between.”

Following Team UK’s success in WorldSkills 2011 (bagging 12 medals – its best performance to date) the UK has decided to run an annual national skills competition with the aim of encouraging more young people to get involved and raise standards in vocational education and qualifications.

But there are still hurdles to overcome, says Bartley. One is getting the message out to parents, young people, educators and politicians about the value of vocational skills. While undoubtedly well-intentioned, the previous government’s focus on ‘education, education, education’ – which led to a commonly held perception that it wanted at least 50% of young people to go to university – is at least partly to blame, he says. “It accelerated a change that was going on in society, particularly amongst parents, about what was the best for their children…and university was it.”

While “we are pushing on more of an open door than we have in the past,” the perception of vocational skills still need to be tackled, he says.

“The idea of apprenticeships for ‘thickos’ is something that needs to be dispelled from parents’ vocabulary. I have met too many parents who have said to me ‘Oh, want our children to go to university along with other bright children’ and ‘I think colleges are really important and vocational education is really important for those who are not clever enough.’ Well, actually, there are a lot of clever people at university who would be doing even better in their lives by going to college and doing an apprenticeship.”

But he would hate to see a “turf war” between academic and vocational skills, he says. What young people – and their parents – really need is access good quality, independent advice and guidance.
“We are not very good at allowing children to study the facts and make a decision about what is good for them, what is good for society and everything else.

“I don’t rubbish universities; I went to one myself and I had a great time…but what I am really interested in doing is having out there the tools and the understanding for people to be able to make informed decisions about their futures.”