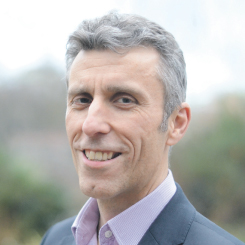 David Hughes said he never had any “grand career plans.” In fact, the chief executive of NIACE, who has also had top jobs at the Learning and Skills Council (LSC) and Skills Funding Agency (SFA), could easily have ended up in the financial sector.

Raised on a council estate in north London, where “everyone left school at 16,” Hughes made it to grammar school at 13, but didn’t give any serious thought to higher education. His father was the clerk in a motor repair garage, his mother a dinner lady and he just “didn’t know anyone who had been to university.” And as the youngest of four boys, he was more interested in having money in his pocket. “It’s not like we were destitute,” he recalls. “But I remember my dad’s glasses broke and he had tape on them for about two and a half years because he couldn’t afford a new pair…it was that kind of poverty.”

At 15, Hughes was set to follow two of his brothers – who worked at Lloyds and Barclays – into banking. His self-confessed “competitive streak” had made him go one better and apply to the Bank of England. But with a job offer on the table, Hughes was given “the best bit of careers advice” he’d ever had. “I’d got through this big assessment process and guy who had interviewed me said ‘Yes, we’ve got to give you a job, but I don’t want you to take it. I want you to stay on at school and do ‘A’ levels and come back to us after that.’”

He did stay on at school and admits his decision to apply to Cambridge was also fuelled by competitiveness. “I remember sitting at home eating tea and saying I had this meeting about going to Oxbridge and my brothers just started laughing. It was the classic line: ‘People like us don’t go to Oxford or Cambridge.’ And that was enough incentive, really. I thought, ‘Okay, I’ll show you.’”

Hughes went on to secure a place at Fitzwilliam College to study Geography, where – far from the rich learning experience he had expected – he found “people were just getting pissed and being sick behind hedges.”

A keen sportsman, he was also unimpressed by the “outdated and outmoded rituals” of the university’s clubs and societies. “It was just incredibly sexist and exclusive, which I really hated,” he says.

After university and an MA in Social Housing at Salford University, Hughes spent the next two years working in various housing jobs in Liverpool (including working with co-operatives and tenants’ association) where he says he got his first taste of adult education, helping residents understand how local decisions were made and how they could communicate with influence decision-makers.

But when his wife (a university academic) was offered a job in Australia it seemed like too good an opportunity miss. Hughes arrived in Western Australia in 1993 thinking he might “learn to surf” and ended up working for a housing co-operative and fighting for the rights of aborigines.

The family returned to the UK in 1997 and settled in Loughborough (which after driving home from work past the Indian Ocean every night took a bit of getting used to, he jokes) and took on the role of chief executive of the Nottingham Council for Voluntary Service.

Under the new Labour government, the voluntary sector quickly became an “equal partner” with the public and private sectors, he says.

At the same time the Learning Age White Paper (which advocated, amongst other things, learning entitlements at all stages of life and an adult qualifications system based on units that accumulated over time), authored by the then education secretary David Blunkett, had captured his imagination, setting out “a really compelling vision for what adult lifelong learning should be.” So when the job came up at the LSC in 2000, as executive director for Derbyshire, he jumped at the chance.

The biggest challenge of his career came five years later, when he was “pushed down to London” as the capital’s regional director to tackle the reputation of LSC, which he admits was “shocking” at the time. But what no one had told him was that Ken Livingstone – Mayor of London at the time – had made it clear that he intended to take control of the LSC

And from their first meeting – at the public opening of the new City Lit building – it was clear Hughes had a fight on his hands. “He was the key note speaker and he stood up and said ‘I don’t know why you bothered coming, Mr Hughes’…and I’m going to paraphrase here… ‘I’m going to take it over and do what I did with Transport for London and kick out all of the top managers and you will have to go back where you came from.’”

Dealing with the political infighting that followed was one of the toughest challenges of his career. The irony was that everyone actually wanted the same thing – to deliver better learning for Londoners – but getting through to Livingstone wasn’t easy.

Things “did get a bit nasty for a while” and while he generally managed to keep his cool, Hughes recalls one memorable incident when he swore at one of Livingstone’s advisors and stormed out of a meeting. “I remember ringing the chief exec at the LSC then and saying, ‘I think you need to find me another job because I think I’m about to be kicked out,’” he recalls, with a smile. But the LSC did manage to build a relationship with Livingstone, who eventually conceded that the organisation wasn’t so bad after all, and as Hughes points out, with an even broader grin,“We lasted a bit longer than he did.”

It’s hard, isn’t it, when you have more than a million young people in need…but what about the 45 to 50-year-old who has lost his or her job and is vulnerable, and their options for retraining?

The next few years brought more trouble-shooting for Hughes: the EMA fiasco in 2008, when thousands of young people had to wait months for payment, closely followed by the capital funding crisis, which meant almost 150 colleges had to cancel rebuilding plans as a result of a LSC overspend.

His final challenge, in early 2010, was helping to shut down the LSC and get its two replacement organisations – the Young Peoples’ Learning Agency (YPLA) and the Skills Funding Agency (SFA) off the ground.

His decision to move to NIACE last September was motivated by his desire to “have a much more direct impact on peoples’ lives and the quality of learning.” While the SFA is an important organisation, it is a funding body, he points out. “It’s important…and it needs to be effective and efficient, but it wasn’t like the LSC ten years ago, where you felt like you were having a much more direct impact on people’s lives and the quality of the learning that was delivered and so on… it felt more remote.”

One of the biggest challenges in his new role will be making sure that the gains in adult learning made over the last decade do not fall by the wayside, he says. Whilst having ministers like John Hayes and Vince Cable who are obviously “passionate about many of the things we are” is a definite plus point, but he is concerned that resources will be focused solely on young people, which could come at the expense of other equally important groups.

He explains: “It’s hard, isn’t it, when you have more than a million young people in need…but what about the 45 to 50-year-old who has lost his or her job and is vulnerable, and their options for retraining? Because is that not as horrific and bad and difficult? Particularly if they have children.”

The new careers service, due to be launched in April, does have potential, he says, but making sure the service is known – and used by – people of all ages, will be the biggest challenge.

And with the prospect of having to work until the age of 70 looking increasingly likely for many, one idea NIACE is hoping to propose is the introduction of a career ‘health check’ at 50 where people could get advice about their career progression or even retraining. “It would be nice, wouldn’t it, to be able to say, ‘Come in and have a discussion about retraining,’ or ‘Have you thought about using your skills for something else?’ And trying to give a bit of a boost to lifelong learning in that sense…and it wouldn’t cost any more money really, because that resource is already there.”

The biggest danger, says Hughes, is the creation of a system that is only for people “on the edge…for people who are signing on or people who need a job today.”

“I think deep down we have to get back to a sense that learning is about people’s well-being in the fullest sense of the word. Human beings are well when they feel like they are making a difference or doing something positive and are learning – because learning is not something that is just done in a classroom – it is doing something you really want to do.”