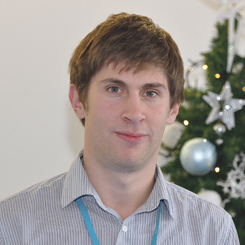 At 25, David Travis is certainly one of the youngest college senior managers in the country – not bad for a guy who fell into working with young people almost by chance. As Head of Learner Support at Lewisham College, he is responsible for getting learners into the college and making sure they stick around.

Ironically it was his own difficulties in education that led him down his current career path. A conscientious student, Travis flew through his GCSEs and started A levels in English, psychology, law and history, but found the pace of work much faster and the content “much drier” than GCSE. By the end of his first term in sixth form, he had dropped English and history, leaving a gaping hole in his timetable.

As it was too late to pick up any new subjects, his head of sixth form suggested he get involved in a project helping younger students with literacy and numeracy issues. From the first session, he was hooked.

“I started working with them [the students] at Christmas and one of them sat GCSEs in July,” he recalls. “Being there at the end, and knowing that I had helped to build their confidence and self-esteem and helped to contribute towards them getting a decent grade, was fantastic.”

The experience led him to volunteer with his local Connexions, as part of a youth advisory board. When a paid position came up, as a peer mentor for young people using the service, he was encouraged to apply.

Leaving school at 17 was a tough decision, but having “never really wanted to do A-levels in the first place” (Travis had wanted to study performing arts at college but a careers advisor steered him into A-levels instead) he felt it was the right move.

After spending most of his formative years in the sleepy county of Staffordshire, working in Stoke city centre – where unemployment was high and drugs problems were common – made him realise how sheltered his own life had been.

But what surprised him more, was moving back to work in Staffordshire as a schools-based careers advisor a few years later and finding that these problems – and drugs in particular – could be just as much of a problem in the “sleepy suburbs.”

He recalls working with one thirteen-year-old who was addicted to crack and heroin and ended up being placed in local authority care. Mental health issues were also common, particularly amongst those with complex home lives.

“You can keep them [learners] safe while they are in school or college, but you don’t know what’s going on outside of the gates or at home,” he says.

What Connexions tried to do was bring together the standard universal careers advice and the intensive work on barriers to education and employment – something Travis always believed “made sense.”
And while he recognises that “careers advice does always seem to get a bad reputation,” having had a bad experience himself, he was determined to make sure “no one ever left unhappy with what they had heard” from him.

At 23, having qualified as a Connexions personal advisor at just 21, Travis was looking for a new challenge. He was keen to move back to London, having spent some of his childhood there, so when a Connexions job came up in Kensington, supporting people with learning disabilities, he decided to go for it.

Having discovered that there was no college course in the area for people with severe learning disabilities, he set about creating one, working alongside the local authority, college and social workers and the education funding body the Young People’s Learning Agency (YPLA). It was an experience that stood him in good stead when he decided to apply for his current role at Lewisham College.

He admits that when he applied, at the age of 24, he thought he wouldn’t stand a chance of getting it. “I was really nervous being at the interview because people there already knew each other and were talking about people that they knew together and that they all had a history of line managing,” he recalls. “I have to say, being a twentysomething, it looked like a toughie.”

Fresh in his mind was a speech given by a senior person at Connexions, who had said that young people in their early twenties were not “emotionally mature enough” to cope with full-time work – never mind senior roles. “I know 40-year-olds who I don’t think are ready for full-time work,” he says, laughing. “Everyone is so different, I don’t think you can ever make a blanket statement.”

In the year he has been in post-Lewisham College, there have been many changes to contend with, not least the scrapping of the EMA and the introduction of a replacement bursary fund. One of the biggest challenges has been letting the most vulnerable learners who are guaranteed a payment from the new bursary (children in care, those with disabilities, care leavers and teenage parents, amongst others), know that they are guaranteed funding.

Identifying who those students are can be difficult as local authorities can be reticent to share sensitive information about young people, says Travis.

Making decisions on how to allocate the discretionary fund has also been tough. As Travis points out: “There are other members of our cohort that are just as vulnerable as care leavers and looked-after children…so deciding how much you are going to offer them as a reasonable incentive to pay for the things that they need to do their course is really tricky.”

“You can keep them [learners] safe while they are in school or college, but you don’t know what’s going on outside of the gates or at home”

The college has put in an application for funds from the government’s ‘contingency budget’ (available this year only to help with the transition from the EMA to the bursary fund), but not knowing whether they will receive funding next term means many students are in limbo, unsure whether they will be able to go back in college after Christmas, something that can have an impact on their achievement. “If you are worried about everything else that’s going on outside your college life, it’s going to be hard to buckle down and focus,” says Travis.

Changes in the visa requirements for students wishing to study in the UK have also impacted on the workload of Travis and his team, including “complex negotiations with the Home Office, things like that,” to make sure learners don’t miss out on their chance to study at the college.

Housing is another key issue for students and something Travis says he is “not expecting to get any better over the Christmas period.” The college works closely with local homelessness projects and charities; staff go into local hostels to talk to residents about college courses and can help them through the enrolment possible if necessary.

One issue that might rear its head in the New Year is the matter of how to support young parents. A consultation on the government’s Care To Learn programe, which provides support for childcare and related transport costs to help young parents further their education, has recently ended and the outcome could well be less money to go around for young parents who want to combine parenthood and study.

For the first time in his career Travis says he hasn’t got his eye on the next rung of the ladder – he is too busy with his current role. But he is ambitious and wouldn’t rule out a more senior role in education – perhaps as a principal – in the future.

What continues to motivate him is doing his best for the learners. “There is a real history at the college of being as inclusive as we can and tapping into peoples’ raw potential, getting them through the courses and getting them to progress.

“Unlocking someone’s potential and giving them opportunities is what makes it all worthwhile.”