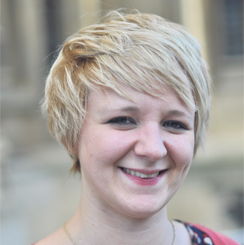 The last time I interviewed Toni Pearce, she was visibly nervous. As the incoming NUS vice president (FE), it was her first official press interview and it was clear she was both exhilarated and worried about the year ahead.

Having led the NUS campaign to save the Education Maintenance Allowance, which resulted in a partial u-turn from the government, the outgoing vice president, Shane Chowen, would be a hard act to follow, she said.

Also daunting was the prospect of public speaking, which she confessed she didn’t really enjoy. And having spent two years as union president at Cornwall College, where she sat on various boards and committees (including the governing body), she knew some people might need convincing that she was more than just a glorified head girl.

But when she published her first blog as president, last May, there was little doubt that Pearce meant business. In it, she claimed that since being elected as vice-president, she had had to deal with “dozens” of cases of sexual harassment, where union officers and students had approached her, expecting her to have sex with them because they had elected her. She wanted to make clear that NUS had a “zero tolerance” approach to sexual harassment

It was a bold move, but one that seems to have paid off. Six months on, Pearce says the harassment issues have calmed down. She has also realised that she is “not as bad at public speaking as she thought she was” and has coped well, even when she spent three weeks as acting president after Liam Burns took leave for personal reasons.

“I think people have realised that I’m not just here to make up the numbers,” she says.“I’m definitely here because it’s what I am passionate about and it’s what I want to do…and I’m not going to take any of that quietly.”

It’s hard to imagine Pearce taking anything quietly and, as ever, she is keen to point out that she is “not afraid of speaking her mind”, a quality that has earned her the reputation of being a bit fierce. In fact, she is reputed to be so feisty, someone has set up a Twitter account to lampoon her. Toni_Fierce boasts of getting legless on cider and picking fights with people in the street, which Pearce mostly takes in good humour.

At times some of the posts have been a bit close to the bone, (including one, when she was still Cornwall SU president, about getting drunk with the principal’s sons) but Pearce accepts it comes with the territory.

One of the biggest challenges has been moving away from her home in Cornwall for the first time. While she loves living in London, having been a “big fish in small pond” at Cornwall College, becoming part of something “that’s much bigger” has taken some getting used to.

And juggling the competing demands of the job has also been difficult at times. “What I’ve found is that things come up and they’re all equally important so it’s about prioritising…whether to campaign on student governors, international students, enrichment, funding cuts or adult students or whatever. In reality, you can’t really prioritise and you have to just sort of do your best for everybody.”

But saying yes all the time can be tiring. Most weeks are spent travelling up and down the country (Virgin trains are getting good business out of her, Pearce jokes) attending meetings, conferences, and visiting colleges.

It is certainly not a 9 to 5 job, and she admits she never really feels as if she’s off duty. “I guess at 2am you’re still vice-president. It doesn’t matter that it’s not office hours and I don’t think that excuse would wash with our membership. I mean, people don’t stop being students at 2am, so I shouldn’t really stop being their representative.”

Thankfully, when she gets a call out of normal office hours, invariably it is something nice, like an invite to a campaign launch or a radio appearance. But Pearce does admit that she finds networking “difficult at times.”

And although she is rarely “star struck” (the former Lewisham College principal and LSIS chief Dame Ruth Silver being one notable exception), attending award ceremonies and events with “important people” and having one-to-one meetings and phone calls with ministers has taken her out of her “comfort zone “ more than anything in the job.

Union officers and students had approached her, expecting her to have sex with them because they had elected her”

Pearce says she has also found people management hard at times and admits she is still learning to think before she speaks. “I guess that people generally understand when I am being sarcastic or when I am making a joke, but maybe that’s not always the case. And I can be quite challenging and confrontational if someone says something I don’t agree with…which I guess is not always the best way of dealing with a situation.”

But she has many achievements to be proud of – not least her successful campaign to stop the government removing the requirement for every college to have at least student governors. She is also proud of helping to educate the student movement that further education is much more than “16-18 students doing A-levels.”

The Department for Education generally focuses on schools and sixth forms, so anyone who is 16-19 and studies in a college gets missed out quite a lot by the government.”

But she has nothing but praise for the skills minister John Hayes, who she says has “a lot of time” for the NUS and students generally. “He is really keen on students being involved in the design and delivery of further education.

I think he is really positive and quite refreshing particularly from this government,” she says. “It’s good to be able to chat to him about student governors and explain to him how we feel, whereas we get the complete opposite from Mr Gove.”

Pearce says, with mock outrage, that Andy Burnham moving over to health really “trashed her” (the running joke amongst her NUS colleagues is that she has a big crush on the former shadow education minister) and the jury is still out on his replacement, Stephen Twigg.

While it is early days, “he has definitely picked up the portfolio of education minister in the same way that Michael Gove sees it, as about schools and maybe 16-18 and not necessarily more broadly speaking,” she says.

And while she is pleased about his announcement, at last month’s Association of College’s conference, of a commitment to reinstate face-to-face careers advice in colleges and schools, it is “really disappointing” that he hasn’t made a similar commitment on the EMA. “I think a lot of people walk into education, and particularly further education, thinking that it is fairly simple – and they couldn’t be more wrong.”

Pearce, who is now 21, says she has been thinking about her plans for next year, but won’t make any final decisions until after Christmas about whether she will stand for vice president (FE) – or indeed any other post – next year. And she is still no clearer about her long -term career plans than she was a year ago, when she had applied to “five different universities to do five different degrees” (ranging from politics to neuroscience).

While she says the idea of becoming an MP “is not an attractive prospect,” she would love an education job in policy or campaigning.

Her proudest moment as vice president (FE) was returning to Cornwall College recently to give a speech at a graduation ceremony for degree students. “To go back and speak to them…as someone who doesn’t have a degree and hasn’t graduated, who is still able to get up there and give a speech to people who I have grown up. with It was a real privilege.”