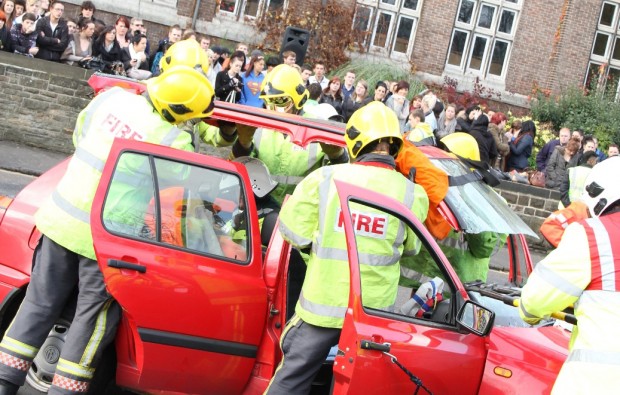 Students were shown the harsh realities of the roads in a hard hitting safety campaign.

Chesterfield College bore witness to the dramatic events as part of the Dying2Drive campaign, co-ordinated by the Derbyshire Fire and Rescue Service.

The college’s own Uniformed Public Services students also played a part in the event, marshalling the ‘collision’ so crowds were kept at a safe distance, making sure the emergency services had full access to the scene and even playing the part of the casualties.

The event’s aim was to raise awareness in young drivers of the results of not wearing a seatbelt, dangerous driving, modifying vehicles and drunk driving.

Community safety officer Victoria Sparkes said: “At that age no-one thinks that it will happen to them. Our workshop works with young people and helps them to understand why certain behaviours and actions are dangerous to them and others.”