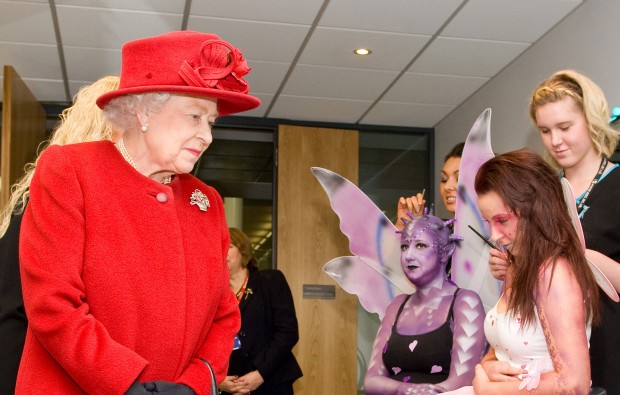 Flag waving youngsters heralded the arrival of The Queen and The Duke of Edinburgh as they opened a new college campus.

Locals gathered and lined the streets of Redhill and Merstham for the arrival of the pair, who visited East Surrey College (ESC) to unveil a plaque at Gatton Point.

They were greeted by children from Furzefield Primary School and officially welcomed by Sarah Goad, Lord Lieutenant of Surrey.

Inside the new college campus, The Queen and The Duke of Edinburgh were introduced to students, staff, members of the new build project team and partners of the college before embarking on a small private lunch with local dignitaries.

Laura Selby, Student Union President at ESC, said: “It was such an honour to be part of this day. I was on the same table as the Queen for lunch and it was top class – the lunch was really good.

“The atmosphere was fantastic, everyone was really chatty, talking about the college – the Queen spoke to everyone on the table – it was like a little community.”

As part of the two and three quarter hour visit the couple continued with a tour of the state-of-the-art facilities, meeting students from various departments along the way.

Jayne Dickinson, the acting principal and CE of East Surrey College said: “It really was an outstanding day and truly memorable for the college and all our guests.

“What stood out for me was how engaged both the Queen and Duke were with the students, they showed so much interest in what they were doing and their plans for the future.

“I am so proud of the students and the staff, they did a fantastic job of showing what makes vocational courses at the college stand out.”