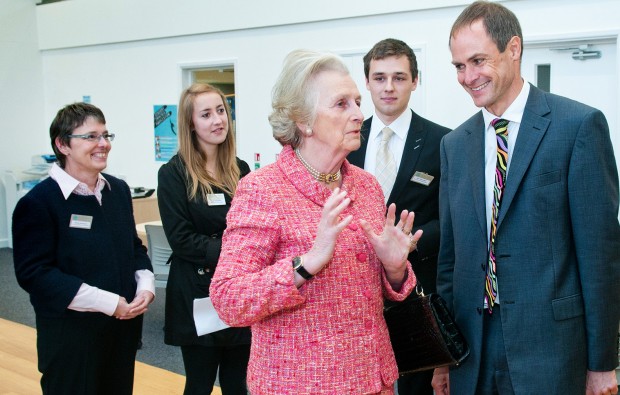 The Glyn Library at Barton Peveril College, in Eastleigh, accommodates 255 students and has twice as many PCs as the former building. Since it opened at the start of the academic year, student usage is up 69 per cent on the same period in 2010.

After touring the college in the company of student ambassadors Emma Gamblin and Sam Saunders, Dame Mary unveiled a plaque commemorating her visit and naming the library in honour of Godfrey Glyn OBE, principal at Barton Peveril from 1996 to 2008.

Congratulating the college on its good financial housekeeping and new facilities, Dame Mary said: “Education is a partnership between teachers, students, governors and parents and when that is working right then everything is a great success.

“I am incredibly impressed by what I have seen here today. Education is something that can never be taken away from people…it is so very important.”

The entire library refurbishment project, which cost just under £500,000, was financed from college reserves without government grants. The original library was built in the 1990s with funds from Hampshire County Council.

“The Glyn Library has a fundamental role to play in helping students learn how to study independently and I’m delighted Dame Mary has seen it in action.”