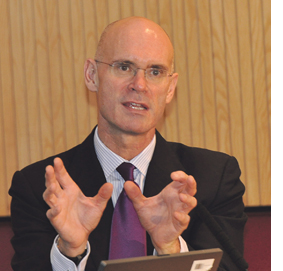 The chief executive of the Skills Funding Agency (SFA) says he is “grappling” with apprenticeship issues after admitting to “teething problems” in the current system.

Geoff Russell, speaking to FE Week at the Association of Colleges (AoC) Annual Conference, said the SFA has “spotted” concerns and is trying to better define apprenticeships.

He said: “One of the important elements of an apprenticeship is experience at work. And you know the benefits of that aren’t necessarily as measurable as perhaps one would like, but I think most people recognise there is a value for spending a year or two working with people in a work environment.

“So it’s kind of a definitional thing and it’s arisen because of the huge, successful increase in the number of apprenticeships.

“There’s always going to be some teething problems and this is the emergence of one. I don’t think you’ll be surprised to learn that it’s been spotted and we’re working with colleagues in the National Apprenticeship Service to get a tighter definition of what an apprenticeship is.”

Mr Russell said the SFA would “probably need to tighten the rules” around what is considered to be a reasonable length of an apprenticeship, while admitting some cases were raising questions about the structure of apprenticeship frameworks.

He said: “I think we’ve probably been operating on the assumption that apprenticeships should be one or two years.

“I guess instances like that provoke the question ‘well should we be a bit more proactive in terms of saying what the expectation should be around the average duration of an apprenticeship?’ If someone is an outlier from that expectation, it’s about having a look at it and saying ‘well is there a good reason for that?’ or maybe we should be saying to people, ‘we think it needs to be a bit longer’.”

Mr Russell (above) said the SFA was “grappling” with issues. He added: “If you are in retail or if you are in health, versus if you broaden into mainstream engineering. These are the kinds of issues we’re grappling with.

“In the meantime, I think I can say pretty conclusively, there are very few people out here that we’re aware of that are just breaking the rules. There are a lot of people following the rules in a way that is to their advantage.

“It’s incumbent on us to possibly look a little more carefully at some of those cases, and we are, but I just think we need to keep it in perspective Of the hundreds of thousands of apprenticeships which are out there, the vast majority, are doing something which pretty much looks like an apprenticeship.”

Mr Russell was also asked about Elmfield Training, one of the UK’s fastest growing training providers.

The firm has been highlighted recently by FE Week and TES magazine for its profit margins and use of public money.

He said: “There’s an issue that says, what is a reasonable amount for an organisation to make, in terms of profit delivering training. I don’t know the details, but my guess is Elmfield is delivering in a way which is quite possibly entirely compliant with the rules.”