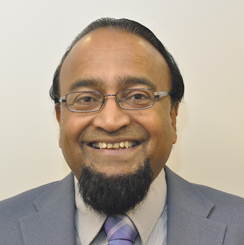 Daniel Khan had his first lessons in entrepreneurship from his father, who ran a corner shop in Trinidad.

Helping out in the shop at weekends and cycling round the neighbourhood delivering groceries, he quickly developed a head for business. “It was a good education because you learned the value of hard work, but you also learned the value of money because margins were so tight. He was flexible with customer service, pricing and going that extra mile,” he says.

These are lessons he has carried through his professional life – particularly the bit about going the extra mile. He has had an impressive portfolio career that has included accountancy, financial management, teaching, college leadership and now a chief executive role at the qualifications awarding body the Open College Network, London Region. At some points in his career, he has had two or three jobs on the go at a time.

As a child, Khan set his sights on studying engineering at university. But as the second of five children, he was reluctant to burden his parents financially and chose to train on-the-job as an accountant instead.

When I first moved back to the UK, my parents were back at home, I didn’t have anyone to rely on…I felt I really had to make myself sustainable and financially independent”

In the early 1970s, he was offered the chance to finish his training in London. But after the “nice weather, beaches and barbecues” he had enjoyed growing up in Trinidad, living in the UK was a culture shock. “It didn’t dislike it, but initially it was different,” he recalls. “It was so vast and impersonal…I found the winter and the grey skies difficult, so I was definitely going back to Trinidad as soon as possible.”

Khan did go back to Trinidad – with his wife, who he had met while studying in London – but returned to the UK in the early 1980s and settled in Kent. After a short spell working for Lyon’s Ice Cream, he landed a financial management role at the University of London and spent the next sixteen years working, amongst others, for the Institute of Education, School of African and Oriental Studies and the Institute of Neurology.

In his spare time, he set up an accountancy practice, did a Masters degree in financial management, a diploma in Theology and had a variety of part-time lecturing roles, including both accountancy and bible studies. In 1986, he became the first “non-white” to be elected as a councillor for Gillingham Borough Council, in Kent, where he served for eight years.

Khan’s strong work ethic and endless energy (he sleeps for just four hours a night) is characteristic of many immigrants, he says. “I think it’s something that drives many of us,” he says. “When I first moved back to the UK, my parents were back at home, I didn’t have anyone to rely on…I felt I really had to make myself sustainable and financially independent.”

But when he was offered a job as deputy principal at York College in 1996, Khan recognised his limits and sold his accountancy practice to a friend. Three years later, he moved to Grimsby College (now Grimsby Institute of Further and Higher Education) as principal; making history as one of just two black college leaders at the time.

Khan gushes about his achievements at Grimsby, where under his leadership, the college turnover went from £15 million to £60 million and hoovered up other institutions until it had “had grown to stretch from Scarborough to Skegness”. His efforts won him an OBE for which he is justifiably proud.

It was also during his time at Grimsby he picked up the title of ‘Professor,’ a source of puzzlement for some, as has has not held a senior academic role at a university. Khan says the professorship was awarded by Yangtze University in China, where he lectured when he visited on college business.

But it came as a surprise to the sector when he left, suddenly, last year. While a confidentiality agreement prevents him from talking about the exact circumstances of his departure (it will all be in his book, he jokes), Khan hints there was a growing gulf between him and some of his colleagues about the future direction of the college.

“I could forsee that my style had taken the college where they were and where they wanted to be – but the general feel was this period of economic growth was over,” he says, clearly choosing his words carefully. “They [colleagues at the college] had to consolidate and maybe even look at if we needed to be involved in all we were involved with.”

In retrospect, the timing of his departure was “miscalculated,” he says. “We had new governors on board and different people bringing different views and I thought maybe the time was coming to leave…but what I probably should have done was leave in six months, but at that time, I had some friends who were starting up a catering business. Because I had said I wanted to leave they said ‘maybe it would be better to leave sooner rather than later; when do you want to leave?’ I said if we could cut a deal, I’d leave straight away.”

My big drive in life is that there are two factors that affect lives – that’s religion and education.”

He left soon afterwards with £100,000 in his pocket. But because Khan had always dealt with journalists direct, there was no one to deal with the media. As a result, it was “not handled well,” he says, which led to speculation in local and trade press about the reasons for his sudden departure.

When the catering venture didn’t work out, Khan moved into consultancy” but a few months after leaving Grimsby, found he was missing working for an organisation and having a direct influence on peoples’ lives. So when a job came up as chief executive of the Open College Network, London Region, he jumped at the chance.

He has taken up the post at an interesting time; the Open College Network, London Region, along with nine other regional networks has recently been given independent awarding status which will give them the freedom to develop qualifications that meet the specific needs of their region alongside the Open College Network qualifications they already deliver. There is a possibility that some may choose to go it alone – and solely deliver their own qualifications – but decisions won’t be finalised until next month.

The increase in university tuition fees, due to rise to £9,000 a year, will mean big changes right across the education sector and Khan predicts a much bigger demand for a “part-time learning, part-time working” model. Universities and colleges will be under far greater pressure to prove they are providing value-for-money – and that their courses help students get jobs, he says.

As well as looking at developing advanced apprenticeship programmes, The Open College Network, London Region, is exploring the idea of partnerships with universities that would allow students to do their first year of a degree at a college, at a reduced cost.

But while there are many advantages to a more competitive education market, quality does need to be monitored carefully, says Khan. “It’s like the American health service – you will find that some providers will want to do the easy things they can make money on. So they will do all the simple operations but the expensive surgeries, they don’t want to do. So, in education, what you will find is lots of business courses and those that are easy to deliver, but the really difficult things like medicine or engineering, they won’t go into.”

Khan, who recently turned 60, says he “loves working” and has no intention of retiring. But after 40 years of working long days and attending functions most evenings, he has recently joined a gym and now tries to keep at least two evenings free a week. What continues to motivate him about further education is its capacity to transform lives.

“My big drive in life is that there are two factors that affect lives – that’s religion and education.

“In religion you can have a life transforming experience and change your life. In education, you can have a better quality of life, a job, work your way up and do things better for yourself, your family and community.

“There is something very satisfying about that,” he says.