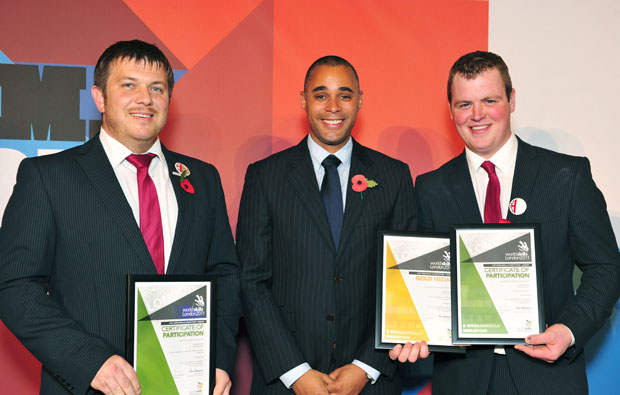 Record breaking youngsters were honoured by an Olympic winner for their achievements at WorldSkills London 2011.
All 43 members of Team UK were celebrated at a Welcome Back Reception at One Great George Street, London, which included a visit by the team’s ambassador and Olympic 100 metre relay gold medallist Jason Gardener MBE.

At WorldSkills London 2011, held at ExCel in October, the team triumphed spectacularly, winning an impressive five gold, two silver and six bronze medals, which placed the UK 5th in the world – the best ever placing in the medals table.

Jason said: “Each member of Team UK should be incredibly proud of what they achieved at WorldSkills London 2011. “Competing on an international stage takes a huge amount of training, dedication and focus and the team demonstrated they can take on the very best from across the world. Team UK are great ambassadors for the UK’s youth and I hope their achievements inspire future generations to achieve success.”

Following the success of WorldSkills London 2011 it was announced by the Skills Funding Agency and the NAS that the annual cycle of WorldSkills UK National Competitions will culminate every year in a major event.

The 2012 cycle of WorldSkills UK National Competitions are now open for entry. Exceptional participants in this cycle of competitions may be invited to compete for a place in Team UK for the next international WorldSkills Competition, which takes place in Leipzig, Germany in 2013. For more, visit www.worldskillsuk.org