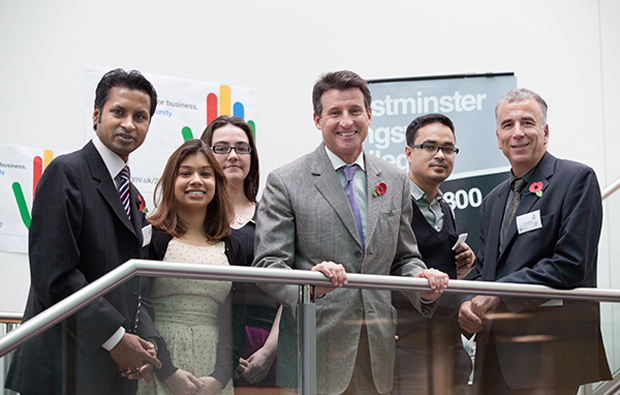 A college opened its doors to help a community realise its Olympic dream.

Westminster Kingsway College welcomed Lord Coe, chairman of the London Organising Committee of the Olympic and Paralympic Games (LOCOG), at the Camden Council Employment and Skills Opportunities Fair. It was held to ensure residents and students in Camden are aware of the employment opportunities during the London 2012 Olympic Games.

The fair, at the college’s King’s Cross Centre, gave residents the chance to meet businesses recruiting for thousands of jobs in a wide range of industries and training providers like the college, who offer specialist vocational training.

Lord Coe, with the college’s principal Andy Wilson and the leader of Camden Council, Councillor Nasim Ali OBE, opened the fair and visited the ‘Have a Go’ Pancake Challenge with Professional Chef Diploma students.

He said: “I have greatly enjoyed visiting the fair and highlighting to Camden’s residents just how many opportunities there will be with London 2012 over the next few months.
“The London Borough of Camden will play a key role in the London 2012 Games next year, hosting the world’s media in Bloomsbury. Camden’s creativity and energy will ensure that they get the best first impression of London and what the Games will be all about.” Mr Wilson added: “The Olympic and Paralympic Games are a real motivation for our students and the young people of London to get involved during London 2012.

“At Westminster Kingsway College, our students are already participating through volunteering, skills training and employment opportunities and we will be able to build a lasting legacy for our students during and after the Games.”