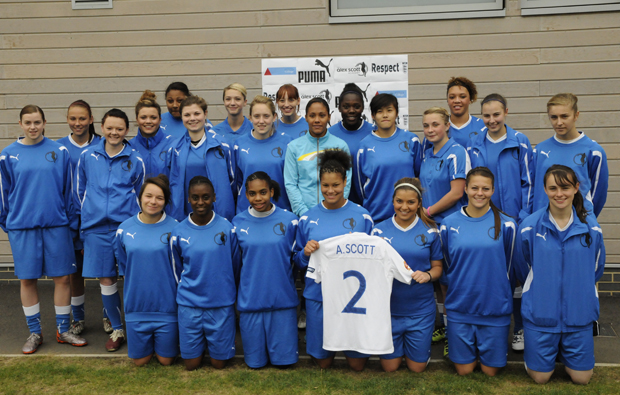 A star footballer was on hand at a college to kick-off the UK’s first-ever women’s football academy.

England international Alex Scott officially opened the new Kingston College Women’s Football Academy in partnership with Puma.
The Alex Scott Academy is the first academy of its kind in the UK and highlights the growth of the women’s game.

Kingston College’s head of school for sport and leisure Jade Mountain said: “I am delighted to be here at the official launch of The Alex Scott Academy. We couldn’t ask for a better figurehead and ambassador for the Academy than Alex. She is an England international and professional player in the USA and she came through an Academy system herself, demonstrating just how effective they are.
“We are proud to be associated with an individual who can offer our players real support and inspiration.”

Scott said: “I am delighted to have officially launched the Alex Scott Academy. To be able to give the girls the opportunity to play and study just like I did is something that I’m very honoured and proud to be doing.”

Andy Taylor, from Puma, added: “Puma is proud to be associated with the Alex Scott Academy at Kingston College. The college is a key partner in education and innovation as it promotes excellence in the classroom as well as on the field.”

The new academy aims to provide players with an unrivalled calibre of training, skills development and match play and Kingston College’s ongoing commitment to offer quality football provision has been recognised with this partnership.