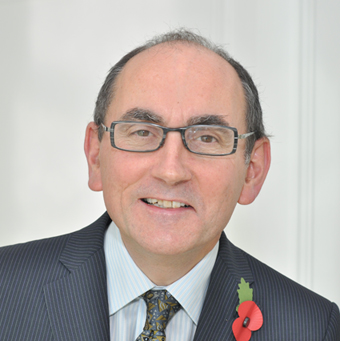 Numbers have always been Peter Lauener’s thing. His first job, at the age of 13, was checking calculations on pension funds for his father, who was an actuary.

“We (Lauener and his brother) were paid two and six an hour which was big money in those days, so we’d happily spend three hours in an afternoon checking these calculations and we were very pleased when we discovered one or two things wrong during the checking.”

Educated at George Watson’s College, a fee-paying school in Edinburgh, Lauener, who is now chief executive of the Young People’s Learning Agency, was, by his own admission, “a bit of a nerd.” Learning just seemed to come easily to him.

And when he was wasn’t doing financial consultancy for his father, the young Lauener was collecting stamps and poring over football books on the Hearts of Midlothian and Scottish football teams, which he followed obsessively. It was a happy childhood, and one, he jokes, that could only been improved by being good at rugby (he was so bad he didn’t even make it into the eighteenth – and bottom – team at school).

At 18, Lauener went off to study Economics at Durham University, where he met his now wife Angie and spent his student grant doing up his beloved Minivan. Although he enjoyed his subject, there was never any grand career plan to become an economist; after securing a place in the civil service after university, it just seemed like a “natural progression” for him, he says.

While he went on to do a variety of roles, what really fascinated Lauener was labour market economics, so when he got the opportunity to work for the Manpower Services Commission (MSC), whose remit was to co-ordinate employment and training services in the UK, he jumped at the chance.

Lauener is reserved and quietly-spoken, but he is visibly passionate – evangelical almost – about the work of the MSC; so much so, he keeps returning to the topic, throughout our interview.

it’s all about making sure everyone in society gets the opportunities to realise their potential, whatever route that takes them”

Having joined at a “fairly junior level,” he got involved in developing youth training programmes and started to get noticed (namely for being able to cope with complicated funding calculations) and, in the space of a few years, rose from middle management level to running an office of 150 people and an annual budget of £50m.

What really inspired him about the job was the chance to make a difference. While highly politicised at the time (they were initially criticised for providing unemployment relief), some of the youth opportunities programmes were a real force for good, he says.”It was a terrifically exciting place to work. This idea of trying to take something that had started as an unemployment measure and build quality training was really exciting.

For the first time a whole raft of young people who had not had the opportunities at school were getting structured work-based training…it was fun and there was this feeling that anything was possible and you could change society and make a difference and make things happen.”

When the MSC was wound up in 1990, Lauener stayed with the civil service, doing similar work, that mostly centred around designing funding schemes, managing budgets and programme delivery. The decade that followed saw significant structural changes, the biggest being the merger of the education and employment departments in 1995.

When he got wind of the chief executive role of Young People’s Learning Agency (YPLA) which along with the Skills Funding Agency (SFA) replaced the Learning and Skills Council (LSC) when it was abolished last spring, Lauener thought it would be right up his street. “I knew the job was going to be advertised and I was watching out for it.

“I’d applied for other things which I’d missed out on, but when this one came along I thought ‘well, this is the one I really ought to go for and so I went for the interview and was lucky enough to get the job,” he says, modestly.

But by the time he had accepted the job, the Conservatives (then in opposition) were already plotting their ‘bonfire of the quangos’ and the Liberal Democrats were “not at all keen” on the role of the YPLA, which looked after 16-19 funding. “I did think to myself: ‘oo-er,’ is this a wise move…and I did wonder if it would be a long lasting job,” he recalls.

The YPLA did survive the quango bonfire, but after months of planning for funding responsibility to pass from central government (via the LSC) back to local authorities (a legislative change made under the previous Labour government), four months later, the YPLA had to switch back to direct funding.

Added to that, the new government had wasted no time rolling out its academies expansion programme. “When we started we were funding just 203 academies and now there are over 1,400, so just keeping pace with that and the pre-16 funding, which is much more complicated…it’s much more difficult to get it right and systematic,” says Lauener.

And there are more big changes afoot. In April, the YPLA will become the Education Funding Agency. Under its new name, it will be responsible for the funding of all 16-19 education, free schools and academies and those schools that have not yet become academies, meaning its annual budget will swell from £12 billion to £50 billion.

But after building the YPLA from scratch, Lauener says staff can rise to the challenge. The toughest part will be making budgets stretch.”The government is, quite rightly, wanting significant improvement in value for money…but everywhere there are budget challenges and we just need to take things as simply as possible so that schools and colleges and providers at the front line get a fair deal through the funding and make the most of that to deliver the best service.”

So will he be working around the clock to build this new organisation? It isn’t a 40- hour a week job, concedes Lauener who says he usually works most evenings during the week. But he is not a slave to his Blackberry and does try to keep his weekends free for family (he has three grown up children) and leisure.

In his spare time he enjoys walking, drinking – and collecting – nice wine and reading. He also likes working with his hands and is proud of the fact he installed the central heating in his house (“although that wouldn’t be allowed now,” he adds) and did some rewiring.

He also harbours an ambition to “learn how to plaster properly” (cue another hasty interjection, this time to point out that at 57, he is not planning to retire any time soon) and do more woodwork, something he still feels frustrated about not being allowed to do at school.

When he does finally leave education, what he would most like to be remembered for is helping to improve the lives of young people in a way that really excites them. He explains: “We need to get away from this notion that there’s higher education over here and continuing education and training over here…when I worked at the MSC, I saw many young people who didn’t take to the traditional education in the way that I did; they didn’t happily enjoy doing sums like I did so their potential was not realised…it’s all about making sure everyone in society gets the opportunities to realise their potential, whatever route that takes them.”