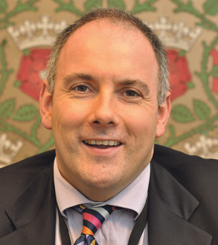 “I always think the best test of a person is not when they’re winning; it’s how they recover from defeat and adversity,” says Rob Halfon. And he would know. It took him three attempts to win his seat in parliament. On his second go, he lost by just 87 votes.

But the Harlow MP, best known for pioneering apprenticeships in Westminster, has faced struggles in his own life, which may go some way to explaining his persistence and determination. Halfon was born with Spastic Diplegia, a form of Cerebal Palsy, which affects the lower extremities – usually the legs, hips and pelvis.

Halfon says he has a moderate version of the disease (he was a late walker and underwent several major operations as a child) and things were “relatively good” until his early thirties when he started to suffer with osteoarthritis, as a result of all the surgery he’d had as a child.

He jokes stoically that his worsening health problems were the “curse” of becoming a Tory candidate. But he refuses to feel sorry for himself and is keen to point out that he has “no hang ups”. In fact, he says, he has been very lucky in life.

By his own admission, he had a privileged upbringing in a Jewish family with traditional values and went to Highgate, an independent school in north London. His father had a fruit and vegetable wholesalers in East London. “It was work hard, save hard and do the right thing…that kind of mentality,” he recalls.

His father, and his grandfather before him also knew about struggle, he says. They fled Libya in the early days of the Gadaffi regime, after the family house and business were seized by the dictatorship. His father came to the UK with nothing, made money, and lost it all again in the recession of the 1990s.

Halfon says he was “terrible” at school, always wanting to do his own thing, (lying on his bed reading and listening to the radio, mainly). Academically, he didn’t start to shine until sixth form when he only had to study things that interested him, he says. By that point, he was already active in the Conservative party, “canvassing…knocking on doors and stuffing envelopes – the whole thing.” He also had his heart set on becoming a Tory MP and his inspiration was Margaret Thatcher.

“I loved Mrs Thatcher from the beginning,” he says, practically drooling. “I remember seeing a cartoon about her in the Express and think ‘God she was strong.’ I love strong women, always have done. Queen Elizabeth was always my favourite queen, my favourite monarch in history.” So while other teenage boys’ bedroom walls were plastered with Blondie, Linda Lusardi and Sam Fox, Halfon had the Iron Lady’s signature on his. “My dad took me to a St. John’s Ambulance event when I was about 16 and I shook her hand and she signed the invitation which I framed,” he explains, still clearly chuffed about it. “In fact, I have it framed in my loo.”

Halfon went on to Exeter University to study politics, where he became chairman of Exeter University conservatives and the Western Area Conservative Students. He also famously took the National Union of Students (NUS) to the European Court of Human Rights – and won – on the issue of compulsory membership.

After a stint selling hotel memberships at a posh London hotel, he got a job as a part-time researcher with Harold Elletson (who subsequently defected to the Liberal party) and over the following decade worked for various Tory MPs including Michael Fabricant, MP for Lichfield. But after losing the Harlow seat a second time in 2005, he decided it was all or nothing.

“It’s not like any job when you’ve got another interview next week,” he says. “You’ve got to wait another four years and campaign more. The count went on for three days, and when you have wanted something from the age of 10 and you’re that close…it was terrible but you can either make a decision of crying and sitting in a darkened room and thinking ‘I’m never going to fight again’ or dust yourself down and try again.”

And that is exactly what he did. He quit his job (by then he was Oliver Letwin’s chief of staff) to work as a freelance consultant, so he could devote more time to his campaign. Halfon says he chose Harlow, where he now lives with his girlfriend (unlike many MPs, he doesn’t have a second home, he is keen to point out) because of its “incredible community spirit.” He also wanted to work in a place where there were social issues, because despite all the “nasty party stuff” the Conservatives are interested in helping the vulnerable or disadvantaged in society, he says.

I think it’s criminal when people leave school unable to read. Whoever’s responsible for that should be shot really”

In fact, it was this kind of work that first got him interested in apprenticeships. “I was visiting a charity called Catch 22 and I met these kids who’d had various problems with the law…and they all started talking about apprenticeships. They starting saying that there were no opportunities for them and if they looked at the National Apprenticeship Service website they might be lucky if there was one apprenticeship advertised in Leeds or something. The God’s honest truth is that I was moved.”

And he wasn’t alone, he says. At a hustings debate at Harlow College, in the run up for his third attempt to win the Harlow seat, he recalls seeing “everyone just wake up” when he started to talk about apprenticeships. “It was incredible, the feeling from the room. And when I talked to parents that was what they wanted…I decided to make it a central plank of my manifesto.”

Since then he has gone on to recruit the first apprentice in parliament, help launch a National Apprentice Card (in conjunction with his old nemesis, the NUS) and a professional society for apprentices is in the early stages of development.

Halfon has also been instrumental in setting up a new parliamentary apprentice programme with the charity New Deal of The Mind Known as the “school of apprentices”, it will offer 16- to 19-year-olds the chance to spend up to three days a week working in Westminster, along with two days working towards a level 3 apprenticeship (equivalent to A-level) in business administration.

It’s early days for the cross-party scheme, but around 12 of the 650 MPS have signed up so far and more are thought to follow. His second apprentice, Louis Luck, has just been appointed
But in an age of Blackberries (Halfon is certainly addicted to his) and Twitter, being an MP is more 24/7 than it ever it was and he admits it can be hard to find time to relax. He still reads a lot, mostly news, but also gadget and techie magazines. He also collects watches and has almost 200 displayed all over his house.

Watching “rubbish” on the telly (he is a fan of soaps and of course Essex-based reality TV show The Only Way is Essex) is another popular pastime, which acts “like a vacuum cleaner of the mind” for him. But, he admits, it can be tough to switch off and he is often up at ridiculous hours of the night, tweeting or writing his blog. While he finds it easy enough to drop off, he is often awake, a few hours later, his mind racing.

Like many Westminster folk, caffeine and adrenaline gets him through the long days in parliament.

As well as his apprenticeships work, Halfon is also an active campaigner on tax cuts (particularly on petrol) and says he believes in “tax cuts for the many, not for the few.” But education and training is what really seems to drive him; he is a big fan of university technical college and would like his next campaign to focus on basic literacy. He explains with his typical candour. “If you look at the statistics of young delinquents and criminals and so on…most of them have dyslexia or reading problems. I think it’s criminal when people leave school unable to read. Whoever’s responsible for that should be shot really.”