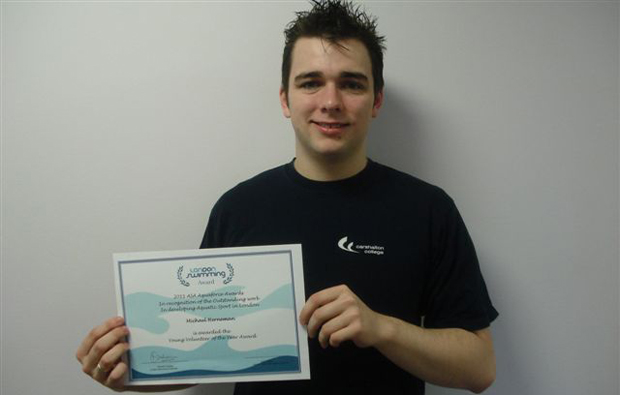 It was presented to him by former swimmer Mark Foster at a glamorous ceremony in Thomas More Square, near London Bridge. Michael has been swimming for more than 15 years and he is also a member of the Cheam Marcuda Swimming Club.

His achievements for his club and at national level include being National Disability Champion. For the past year, Michael has been part of a programme, mygames and has qualified as a time keeper.

This role has involved travelling to different competitions, including galas at Crystal Palace lasting more than seven hours, where Michael’s commitment and attitude has been recognised along with the encouragement he gives to the competitors.

He said: “I was recommended to join the programme by my swimming coach Nick Ibrahim. I wanted to volunteer for the sport that I had grown up with. Being a former national winner I wanted to pay back all the support I had to young future athletes that will be excellent in the coming years.”

mygames offers young people a unique opportunity to promote and celebrate the values of the 2012 Olympic Games. Working with a mentor, Michael is developing skills and confidence to have the opportunity to volunteer at the 2012 Paralympic Trials.

Also, as a regional winner, he has been entered for a national award and could become the volunteer of the year.