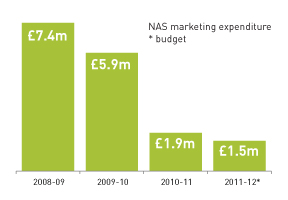 Those with a good ear for sound bites would have found it hard to miss the latest campaign to push apprenticeships on their radios.

But what most people may not know is the budget for the National Apprenticeship Service (NAS) to produce those catchy ads, which highlight the importance and success of apprenticeships, has been significantly depleted.

Figures obtained by FE Week under a Freedom of Information (FOI) request with the Skills Funding Agency (SFA) show the marketing pot for the NAS has reduced from £8.7 million in 2008/09, to £1.5 million this year.

It is a quite dramatic fall; particularly when apprenticeships and targets are at the forefront of the coalition government’s agenda. Just last week, the statistical first release (SFR) figures showed a record rise in apprenticeship starts across all age ranges.

However, while the reduction appears to be drastic, the NAS were one of only “a small number” of government departments, insist the SFA, to dodge the swinging axe of reform and the cruel bite of budget cuts.

Over the last year, the Cabinet Office has put a stop to departmental marketing spend unless it is deemed essential – a category the NAS appears to fall into.

The FOI read: “Along with a small number of other government departments, the NAS has received an exemption to invest in marketing and communications activity to support the achievement of the Apprenticeship targets and objectives.

“The marketing budget for the financial year 2011-12 is approximately £1.548 million and equates to 0.11 per cent of the overall Apprenticeship budget.

“This is supplemented by our in-house PR and communications activities. In conjunction with this, NAS works closely with partners, employers and training providers on co-produced events and activities.”

But what is the money being spent on? The main part of the marketing campaign, according to the NAS, consists of radio advertising.

Bursts of adverts have been played during October and will continue throughout this month and in January on stations from TalkSport, to Jazz Fm.

Newspaper adverts are also running in the national and local press, as well as a telemarketing and direct mail link up.

The FOI added: “The campaign will highlight the business benefits of apprenticeships to employers facing the realities of the current economic climate and describe how apprenticeships can supply a skilled, talented workforce.

“The campaign will focus on smaller employers, those who haven’t participated in apprenticeship programmes, and those employers who are recruiting.”

The budget will also help fund next year’s National Apprenticeship Week, as well as a “specific focus” on new opportunities in London.

Last week, a new marketing campaign led by both the NAS and City Hall highlighting the value of apprenticeships was launched to target businesses across the capital, with Mayor of London Boris Johnson aiming for 100,000 apprentices by 2012.

Will the trend of marketing decline continue? The budget for 2012/13 is yet to be decided.