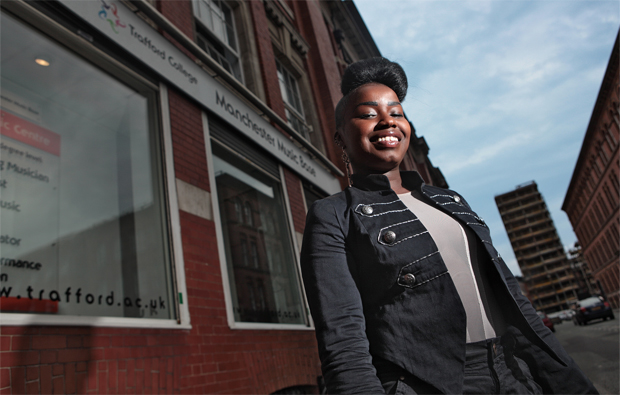 As millions of people sit down to watch TV talent show The X Factor, few would be as nervous as tutors and students at Trafford College.
One of their own, Misha Bryan, has been making waves on the hit ITV programme with a wealth of stunning performances. Misha, whose version of the Adele classic Rolling In The Deep won wide reaching praise from the show’s judges last weekend, recently started her second year of the two-year Vocal Artist course at the college’s plush Manchester Music Base.

Based in the heart of Manchester city centre, the Music Base has purpose built recording studios, rehearsal spaces and editing suites.
It was launched in 2007 following a £1.5 million refurbishment and has been pivotal in helping to create Misha mania.Her tutor Leanne Brown said: “Misha has a really polished and confident performing style and she has always been a very natural performer. She has a very strong voice and has taught us a thing or two about putting on a performance.”

Leanne also said the college’s approach to the course has been an ideal setting for Misha to prepare for her X Factor journey.
She added: “Our Vocal Artist course gives students experience in performing because they have to put on their own concerts as part of their assessment.
“This helps give our students the confidence to perform which has certainly come across throughout Misha’s time on the X Factor so far.”

But how far does Leanne think Misha can go? She said: “Misha has the potential go to all the way in this competition, although I have warned her that to become a real success she needs to avoid getting caught up in the circus of the show and concentrate on her talents.”

However, Misha is not the only college student to star on The X Factor.Liverpool Community College student Craig Colton has been an impressive competitor on the show – many tipping him for the top.
Craig studied at the college’s Arts Centre, but last week he was wowing the judges with his version of Christina Perri’s Jar of Hearts. Staff and students at South Tyneside College, meanwhile, are throwing their support behind The X Factor group hopefuls Rhythmix. The four-piece girl group, which features the college’s former student Jade Thirlwall, won praise from the judges following their performance of Nicki Minaj’s hit Superbass on the first live show last weekend.