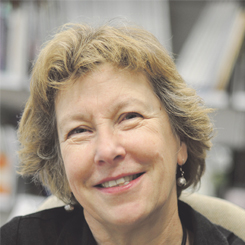 Alison Wolf says she had “no intention of having anything to do with education.”

In fact, when she left university in the early 1970s, she was destined for a career in journalism, having secured a job on the Daily Mail’s money pages.

But she never made it to the newsroom; her husband was offered a job at the World Bank in Washington so she moved to the other side of the world, where she finished her postgraduate studies and taught research methods in two universities while moonlighting as a journalist.

A random encounter changed everything. She interviewed a man who was setting up a new federal agency, called the National Institute of Education and he offered her a job. “I’d love to say it was my brilliant interviewing technique,” she says modestly. “But actually I think he thought it would be good for them to have a member of staff who was not a product of the American system, that it would bring something they didn’t have.”

But going into policy work was “not quite as daft as it sounds,” she says. Having studied Politics, Philosophy and Economics (PPE) at Oxford, Wolf was, essentially, a social scientist with a background in statistics. “I ended up working for the US government on education policy reporting mostly to congressional committees. And actually I had a ball. It taught me how much different political systems can affect the policy-making.”

Wolf, now the Sir Roy Griffiths Professor of Public Sector Management at Kings College, the University of London went on to work for several political think tanks and local authorities on a freelance basis, combining part-time work with bringing up two small children, which she admits was tough but helped her “get very good at working late at night and early in the morning.”

When the family returned to the UK in the mid-1980s (she is married to the economics commentator Martin Wolf) she called a friend who was working at the Institute of Education to see if he knew of any jobs.

There were no vacancies, but he did offer a desk and a phone so she could try and raise herself some research funds, which she did successfully, initially for pedagogical research, some of which related to work-based learning, which she says sparked her interest in FE.

If anything that I said was going to be implemented I had to get it to them [Ministers] fast because otherwise by the time they’d got it they would have moved on and been reshuffled and it would be the eve of the next election and be utterly pointless.”

Securing funding from the Nuffield Foundation in the early 1990s for research into the evaluation of GNVQs moved her back into policy. “I’d begun to have some serious worries and questions and started to become that woman who was always criticising,” she says. “And personally I was getting very uneasy about the way vocational qualification policy was going…whether these qualifications were proving to be worthwhile to people in their adult lives.”

What concerned her most was the introduction of Level 1 and Level 2 qualifications (equivalent to GCSE) that were not fit for purpose, for example hairdressing qualifications that could be taken in school, but did not give young people the necessary skills to do the job. “It was at the point where they  [the government] had introduced all these levels and all these targets and it was becoming, you know, like ‘let’s shell them like peas.’ I’m sorry, but they are a scandal, they have no place in school curriculum, it’s a complete waste of time…” she says crossly.  “And what was even worse was that they [the students] were getting GCSE points for them.”

This is typical Wolf. Passionate and driven, she speaks incredibly fast, switching between girlish and excitable to fiery and indignant in seconds.

But her work with the Nuffield Foundation didn’t just get her back into policy. It also propelled her into the media spotlight. “That was definitely a baptism of fire stuff because it was the first time I had been on national radio and starting with Today is pretty big,” she recalls.

While now a radio pro (Wolf sometimes presents the Radio 4 show analysis, which looks at the idea and forces that shape public policy) she has never got used to TV. “I’ve done little bits of television and it’s terrifying,” she says, covering her face with her hands (something, like talking fast, she does a lot). “Radio is fine, but when I did the vocational review [the Wolf review], I did the sofa, BBC breakfast and it confirmed my views…I’ve been asked to do Newsnight and I’ve said no. I hate television.”

After living on what she calls “soft money” for many years, she was relieved to be offered a job as a “conventional academic” at the Institute of Education (IoE) in the mid-1990s. “So at this point you have this wonderful liberation that you actually have a regular job and you can say what you think without worrying where the next pay cheque is coming from…which is why I get cross about many academies who I think pull punches too much. I mean no one is going to do anything to us as long as we do the academic part of our job properly. I think we ought…” she tails off, as if she has spoken out of turn. “Yes, anyway, where had we got to?”

Later she talks about the “liberation” of being an academic, which allowed her to start writing for think tanks again. “I might as well be open about this…it’s a lot easier to write critical pamphlets when you have a full-time job and you do it full-time.”

But writing think pieces about further and higher education (in her case for “centre and centre right” organisations), was about “policy not politics,” she insists.  And with a change of government looking likely, it was a deliberate move on her part to position herself in a time of political flux. “I suppose I became more and more aware that if you want to influence government you don’t do it by publishing research papers,” she says. “You do it by journalism and by think tank pamphlets. And once a government has been in power for a long time you don’t get much purchase on them. If you want to actually get your ideas over to people, you do better with the group that might be going to come in fresh.”

While she admits to being “a bit terrified” about what she was asked to do – a major piece of research on further education, now known as the ‘Wolf review’ – she insisted that it must be done fast.  “I said I wanted to do it fast because everything takes forever [in government].

“If anything that I said was going to be implemented I had to get it to them fast because otherwise by the time they’d got it they would have moved on and been reshuffled and it would be the eve of the next election and be utterly pointless.”

Between August last year and February, Wolf worked around the clock, balancing research around teaching and other commitments to deliver the report, which concluded that while there was some very good practice in the sector, some young people are wasting their time on colleges courses that do not lead to employment or further training.

The report also stressed the need for young people to study a core of academic subjects up until the age of 16.

“I made two important recommendations,” she says. “One was to actually have some truly respected vocational qualifications that people would recognise…and the other thing – which was almost the most important thing to me – was to change the funding system, because I think that it’s only when you can get per student funding that you can release the innovation and allow institutions to do interesting things. I think that post 18 funding still badly needs sorting out.”

Since last autumn, Wolf has had little spare time for the things she loves most, like cooking, making jam and relaxing in her flat in Tuscany. Having delivered a major government report in record time, she jokes that her next project is to “have a holiday.”

One of the most significant things she has taken away from the experience, she says, is a greater appreciation of politicians.