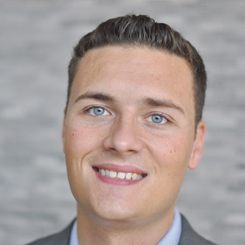 As a “geeky, gobby” free school meals kid with naff trainers, the young Wes Streeting was never going to win any popularity contests.

But, he reckons, it was his own fault. “I won a book token in a school competition and bought a collection of speeches by Tony Blair and read it on the coach to and from games. I mean, what sort of kid reads Tony Blair’s speeches on the bus? I was asking for it really.”

In 1997, he stood as the Labour candidate in the Westminster City School mock election, coming second to the Monster Raving Looney Party. “I was a deeply unpopular kid so it was a miracle. I had kids coming up to me going: ‘I just want you to know I’m voting for Labour, not for you.’”

He laughs as he says this, as he does when recounting many of his school stories but admits that at times it was “horrible, really horrible.” Some of the bullying had a homophobic edge at a time when he “hadn’t even really thought about it” (Streeting came out when he was at university having struggled to reconcile his sexuality with his Christian faith). “Going to school in Victoria where kids are drawn from rough parts of east London, south London, north west London…you learn words that you never knew before,” he says, before adding resolutely. “But, you know, what doesn’t kill you makes you stronger.”

Streeting’s determination and resilience has been instrumental in his career success, both as NUS president and in his latest role as chief executive of the Helena Kennedy Foundation, a charity that supports FE students from disadvantaged backgrounds to progress onto higher education and beyond.

That he took on the job after his two-year stint as NUS president is no coincidence; he knows first-hand how tough it can be for working class kids to achieve their potential. Born in east London in 1983, Streeting’s parents were just 18 and 19 when he was born and separated when he was a baby. While his dad was always around, his job at a local shipping company didn’t pay much and money was tight for his mum who was on benefits and would “struggle to put food in the fridge” some weeks.

Living in one of the most deprived areas of London and being a pupil at a failing school (Westminster City School was placed in special measures while he was a pupil there), meant the odds were stacked against his educational success. But with the help of his family, and “a few really supportive teachers at school” he went on to read history at Cambridge where he was pleasantly surprised to find it wasn’t anything like the  “unfriendly, cold, pompous, posh place” he imagined it to be.

And while Cambridge was where his political career began to flourish, it was the conservative MP Ann Widdecombe – and not Tony Blair – who first got him fired up about politics. “She made some comments about single parents when I was in secondary school. I can’t remember exactly what it was that she said, but do know it was the general Tory narrative about single mums and the benefits of 2.4 children, benefit cheats and all the rest of it. I just thought ‘I’ve got a single mum and she does her best for me,” he says, crossly.

I’d love to be a minister. If you get your hands on the lever you get stuff done”

But tackling injustice is exactly what makes Streeting tick. After joining the Labour Party “as soon as he could, at 15,” he went on to become entertainments officer at Selwyn College, Cambridge where he “had every intention of prioritising socialising over socialism for a while.” But the government had started talking about introducing top-up fees, that would allow universities to charge students up to £3,000 a year (up from £1,000) which led him straight back into the world of student politics.

In his final year at Cambridge, Streeting ran a successful campaign to become president of Cambridge University Students’ Union and once in post, headed up a high-profile battle to save the university’s architecture department. An unsuccessful attempt to become vice president for education of NUS followed, but he did get elected to the part-time NUS executive. Undeterred, he stood again and went on to spend two years as NUS vice-president for education and a further two as national president.

As NUS president, he was an open target for criticism, but the “thick skin” he developed at school helped him through. His biggest achievement, he says, was last year’s general election campaign and getting 1000 parliamentary candidates to agree to vote against any rise in tuition fees in the next parliament, including high profile signatories like Nick Clegg, Vince Cable and Simon Hughes who later broke their pledge. “It became front and centre of the debate and I think became a symbol for the public’s lack of trust in the coalition and the Liberal Democrats, but also in politics in general,” he says.

Although it is little more than a year since the end of his presidency, “it feels like a lifetime”, says Streeting who surprised everyone by joining Price Waterhouse Coopers as an education consultant after leaving NUS. He left just a few weeks into the role after discovering that Redbridge Council, where he was standing as a councillor in a local by-election (he won the election and became a councillor last summer), was audited by PWC, which was a conflict of interest. He then went on to work on Una King’s campaign to be London Mayor.

When his current job at Helena Kennedy Foundation came up, with the remit of supporting some of the most disadvantaged FE students, he knew immediately that it was right for him.

Since it was set up in 1998 as a simple grant-making charity that issued bursaries of £1000 for first year university students, the Helena Kennedy Foundation has grown considerably. Central to the work of the foundation is helping young people who don’t have what Streeting refers to as “money networks and know-how.” He explains: “It’s about ensuring they [the young people he works with] are well connected so it’s like…’okay, you want to be a barrister.

We know someone who has got chambers who can take you in.’ Or if they want to work in a bank ‘we know someone, here are the right courses to take, the right subject mix.’ It’s all about assumed and implied knowledge and that can have such a big impact on where you end up and your direction in life.”

I’m always forced to choose between God, the Labour Party and hangovers,”

Working with disadvantaged young people is “ingrained in the lifeblood and the DNA” of the FE sector and Streeting sees it as his role to “bang the drum” for FE and the success stories it produces. “Part of what we do is try and take those success stories and turn them into even greater successes in HE and in professions afterwards,” he says.

He is critical of many of the coalition policies introduced in the last 12 months, but thinks both the universities minister David Willetts and FE minister John Hayes stand out as politicians who – regardless of some of the “appalling decisions” made by government in the last year – are fundamentally on the side of FE.

The education secretary Michael Gove, on the other hand, has “fallen out of a time warp from the 1940s or 1950s.” he says, particularly with the introduction of the new ebacc, which measures how many pupils achieve a good GCSE in English, maths, two sciences, a language and humanity. Streeting thinks a much more radical approach is needed.

“I think we actually need to tear up the rule book on education in Britain and have 6-13, 14-19 and 19 plus education because I think so many kids are pushed down the GCSE route as if they are standard qualifications.

But if we gave people at the age of 14 the option of doing different courses in different settings, I think you would get so much more out of them.”

Now 28, Streeting admits he has his sights set on a career in politics, and eventually, a role in the cabinet. “I’d love to be a minister. If you get your hands on the lever you get stuff done,” he says.

But he is in “no hurry” and wouldn’t “grab any old ministerial job that was going,” he says. It would have to be on issues he really cares about like education and social mobility.

Juggling his many different lives (that is work, council, and personal) can be tough though and he admits it is his personal life that usually suffers.

Although still a practising Christian, he admits he is not always very good at it. “It doesn’t help that Labour Party canvassing is at 10.30am on a Sunday morning, so I’m always forced to choose between God, the Labour Party and hangovers,” he says, with a wry smile.

He insists there is no “grand plan” for his political career but he is definitely open to opportunities.

“If I got the chance to stand in a seat that I care about then, yes, I would stand. If you really want to transform the country and transform peoples’ lives, then politics is the only way to do it.”