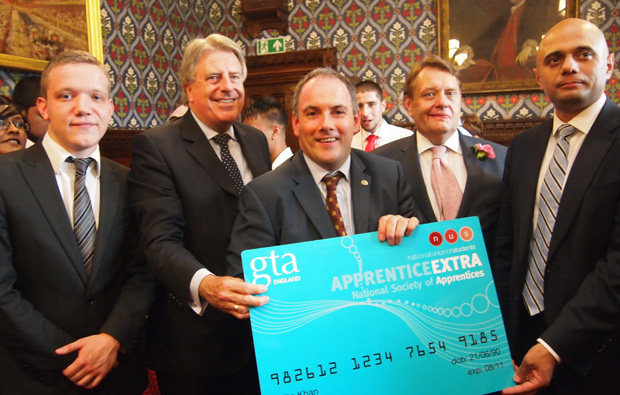 A society for apprentices with a NUS discount card for members has been launched to boost the status of skills-based training.

The Apprentice Society and its membership card are being billed as a skills-based equivalent to the National Union of Students and its NUS Extra card.

Skills minister John Hayes, Robert Halfon MP and apprentice Andy Huckle launched the card at a reception at the House of Commons.

Mr Hayes said the apprentice card would tackle a perceived gap in prestige between academic and skills-based qualifications.

“When you cease to be an undergraduate, you have a chance to become a post-graduate. When you finish your apprenticeship, you’re an ex-apprentice. “I want to further that. Let’s have a vocational route as rigorous, as robust, as recognised and as seductive as the path that Robert and I trod,” he said.

Andy, who is studying with Harlow College said; “I was working with a small business in Harlow making aircraft labels. I saw Robert’s advert for an apprentice in the local newspaper and thought I would go for it.

“I’d started A-levels, but I was 17 years old, just out of school, and I didn’t have a lot of dedication or commitment. I preferred to have a job with a salary, but I didn’t see any prospects in the job I was in. “I’ve always loved politics, but I’d never thought of working at the House of Commons.

Andy finishes his apprenticeship in one month’s time when he sits the last of six exams in his bid to gain an NVQ level three qualification in business administration.