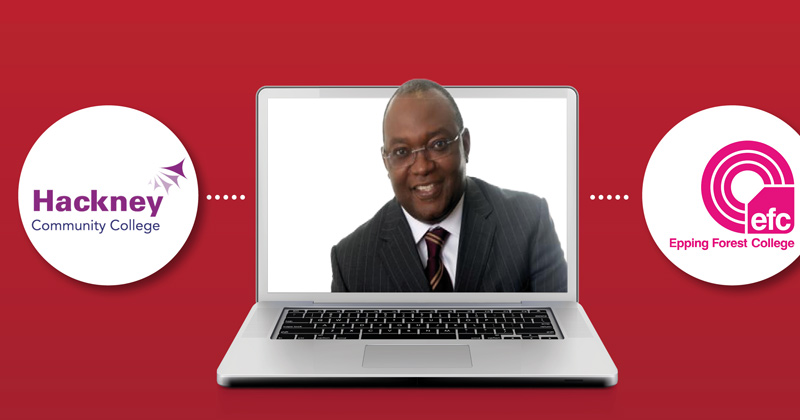 The deputy chief executive of a major London college who abruptly left his post last summer over financial irregularities was recently appointed the finance director of another college in the capital, which insists it had full knowledge of his situation when it hired him.

May ‘Dare (pictured) left his job at Hackney Community College in August after he allegedly spent £338,000 of its money on IT supplies from a company which he secretly owned.

Some of his ex-colleagues have even accused his former employer of attempting a cover-up, though the college said the irregularities were discovered during an audit a few days after its merger with Tower Hamlets College last summer, and one day after he had gone on annual leave.

Mr McDonald said he “used his own company to purchase IT equipment on behalf of the college”, but “did not declare this to the then principal or the board”.

Despite this, some of Mr ‘Dare’s former Hackney colleagues told FE Week that the new college had tried to suppress news of the scandal.

One complained to FE Week that it was “almost as if the people who have taken us over feel no compunction to respect the need to keep things in the public domain”, while another said that “if Mr ‘Dare has sidestepped procedures in the use of public funds, and been allowed to avoid answering allegations that he personally benefitted, it’s just wrong”.

Last month, he accepted a job as the director of finance and operations at Epping Forest College, though a spokesperson told FE Week that he had made staff there aware of the dispute with his former employer “at the point of interview and before appointment”.

He told FE Week that Mr ‘Dare, who sometimes goes by the name Kunle Oluwadare, “went on pre-arranged leave on August 5, before we had the opportunity to put the allegations to him. He then resigned, while on leave during the following week”.

FE Week also asked Ian Ashman, Hackney Community College’s former principal, up to the merger in August 2016 and current president of the Association of Colleges, about the allegations.

He said: “The college has properly reported the situation to the authorities and undertaken an investigation. It would therefore be inappropriate for me to make further comment.”

FE Week understands Newton Rachel Limited was set up in October 2013, with Mr ‘Dare and his wife as the sole directors and shareholders.

He was employed by Hackney Community College for almost 24 years from its inception in 1992, and was made deputy chief executive of corporate services in April 2016.

An employee told FE Week that staff at Hackney Community College had been informed of Mr ‘Dare’s abrupt resignation in August, and were told that “financial irregularities’” had occurred.

They were sent a subsequent email by Mr McDonald, seen by FE Week, which said that the college had concluded an investigation into the matter and found “financial regulations were breached in relation to the procurement of IT equipment between 2013 and 2016”.

Mr McDonald said that the college had not sought to recover the £338,000, because the goods it was used for had been received.

He also stressed that “no settlement agreement was or is in place”, adding: “We have referred the matter to the police who are dealing with it as an alleged fraud and possible abuse of public office.”

FE Week asked the Skills Funding Agency on what action they had taken in response to the scandal, and the impact on Hackney Community College, but a spokesperson said the agency had not intervened.

“The SFA is satisfied that the college implemented the recommendations and that no further action is required from the college at this stage.”

FE Week contacted Mr ‘Dare’s new place of work, Epping Forest College, to find out if managers had been aware of his previous dealings when he was appointed director of finance and operations on January 3, 2017.

A spokesperson told FE Week that “at the time of the appointment” the interview panel had known he was involved in an ongoing employment tribunal case with Hackney Community College.

On January 6, FE Week reported that Epping Forest College had been rated ‘inadequate’ across the board, in an Ofsted report that warned of safeguarding failings.

Mr ‘Dare told FE Week that he did not wish to comment ahead of his tribunal.

A University and College Union spokesperson said: “The episode involving May ‘Dare and computer supply contracts exposes the need for rigorous checks in our colleges.

“Concentrating so much power in so few hands is not healthy and we are also unconvinced that outsourcing these types of roles is always necessary.”

FE Week also contacted the college’s auditors, TIAA, but was told: “We do not comment on work undertaken on behalf of our clients”.

It said there was “no evidence or reason to suspect that any other staff member/s were involved in this breach”.

It also acknowledged faults on the part of the college, saying that “processes and procedures in relation to procurement had been applied inconsistently”, and “there were not sufficient checks in place to ensure that financial regulations were followed”.

Mr McDonald’s email concluded that financial regulations at Hackney Community College had subsequently “been reviewed, to include more specific separation of duties and tighter processes across purchasing and procurement”, which would be “supported by systematic audits, management and governance checks”.

A spokesperson for Epping Forest College told FE Week that an incomplete employment tribunal called by May ‘Dare against Hackney Community College had influenced the decision about his employment at the college.

FE Week understands from Hackney Community College that this tribunal was called on the grounds of constructive dismissal, which is when an employee is forced to leave their job against their will due to their employer’s conduct.

“We felt the case between Hackney Community College and Mr ‘Dare had not yet been satisfactorily concluded, and not wishing to prejudge the outcome, the college agreed to appoint him on a temporary basis until his employment tribunal case was resolved,” he said.

He added that Epping Forest College also received a letter from Mr ‘Dare’s solicitor, which confirmed the tribunal is scheduled for March 2017.